What is Pesta Ubin?
Pesta Ubin is Ubin Open House!

Pesta, pronounced ‘Pays-ta’, is Malay for festival or party. Pesta often describes festivities that bring a community together, such as a wedding; or a cultural celebration. (It is NOT an Italian dish: which is ‘pasta’.)

What's special about Pesta Ubin?
Once a year, people who love Ubin step up to share with the public their special slice of Pulau Ubin. Pesta Ubin activities are heartfelt, organic and led by the community.


Ubin's unique charms are passionately highlighted in Pesta Ubin activities. Its culture, kampung life, nature and wildlife, Ubin land and sea. From Ubin Town to the quarries, and the waters around Pulau Ubin. Morning, noon and night!


Get a taste of the kinder, gentler way of life on Ubin during Pesta Ubin. Leave the city attitude behind, and get with The Ubin Way. On Ubin, we greet one another with a smile, a "Hello", "How was your day?". Respect the culture, get to know the quirky people of Ubin. Be gentle with wildlife that share the island. Keep our footprint light so Ubin remains unspoilt for those who follow behind us.

Everyone is welcomed to contribute suitable activities for Pesta Ubin!

From the outdoors and nature to heritage, kampung life to makan. Walks, cycles, kayaking, other outdoor and water activities. Also exhibitions, talks, demonstrations. From Ubin Town to Bukit Puaka and the quarries, and the shores and waters around Pulau Ubin. From morning to night! The more the merrier!

Activities suitable for Pesta Ubin should:

Pesta Ubin is a great opportunity for visitors to experience and practice the kinder, gentler way of life on Ubin. Hopefully, visitors will practice the Ubin Way beyond Pesta Ubin. With this in mind, please consider incorporating these elements of the Ubin Way in your activity:
More tips on organising an activity that is green, for Pesta Ubin and beyond!


How do I register my activity for Pesta Ubin 2016?

If you are interested in contributing a suitable activity to Pesta Ubin, please share the details via this form http://tinyurl.com/PestaUbin2016

Please register your activity soonest, so that we can provide suitable logistics support to you.

The first Ubin Open House was for one day and called Ubin Day. The first Ubin Day was held in April 2002 organised by Grant Pereira with the Singapore Environment Council. There was a second Ubin Day in 2003.

More than a decade later, Ubin Day was revived in 2014 as part of Project Ubin. Thanks to the support of 31 organising groups who contributed activities to make Ubin Day a success. The day was officially opened by PM Lee who spent the day engaging in various activities around the island! Here's the Ubin Day 2014 report.


Ubin Day 2015 was held over a weekend, with even more activities offered by 34 Organising Groups. Here's the Ubin Day 2015 Report.


Ubin Day 2015 was such a success that this year, we are holding Ubin Open House for five weeks! And renamed it Pesta Ubin 2016.

What happened to Ubin Day?

In 2016, there will still be an Ubin Day Carnival, held on 4 Jun (Sat). This will comprise mainly booths at the Assembly Area from 9am to 4pm. There will also be games and other activities. Do come by and visit!

Find a Pesta Ubin activity that suits your schedule and interest!

Keep up with the latest on Pesta Ubin also on our Facebook page.

Here's more about what to see and do on Pulau Ubin.

If you would like to write about Pesta Ubin, here is our press release. And photos for media use in this flickr group. Thank you! 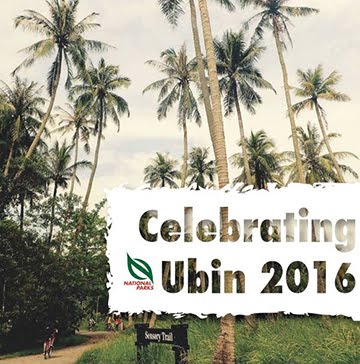 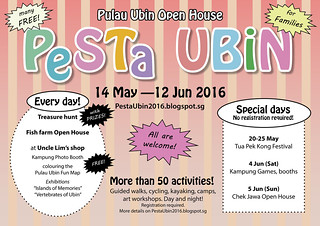 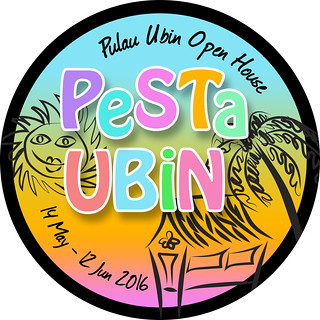